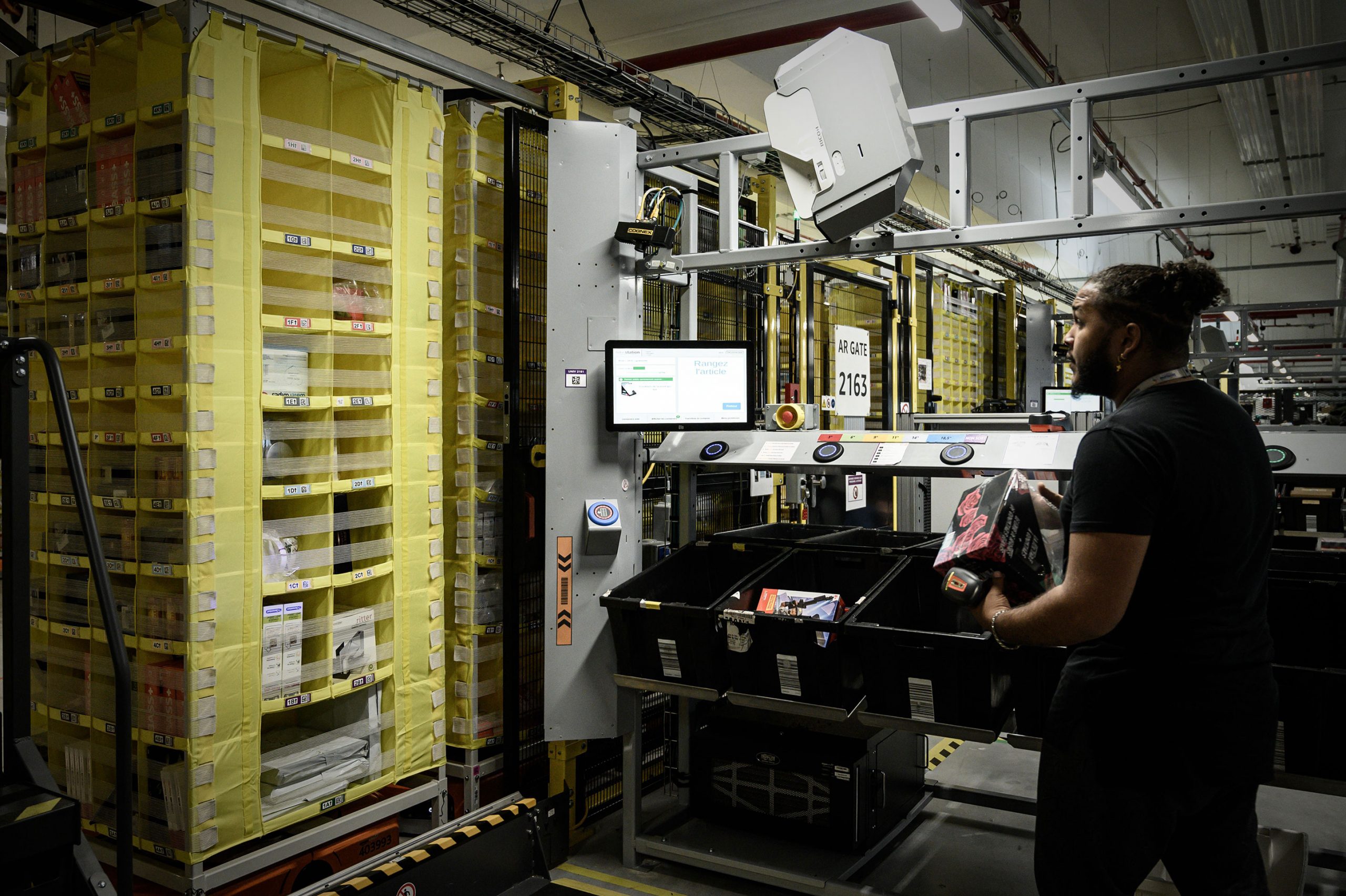 It took exactly two minutes for today’s TC Sessions: Robotics fulfillment panel to make its first Amazon mention. The retail giant looms over the category like no other. It played a foundational role with the 2012 acquisition of Kiva Systems that birthed Amazon Robotics, and remains the 800-pound gorilla looming in the background of any conversation about warehouse automation.

For the past decade, the company has demonstrated an impressive dominance. It’s helped the company set a once-impossible standard of next-day — and even same-day — delivery for many orders. Retailers large and small have sought ways to remain competitive, fostering the growth of an entire industry of warehouse robotics firms like Locus, Fetch and Berkshire Gray.

The 10-year-old Kiva acquisition remains the foundation piece of Amazon’s play. The wheeled systems are effectively the ground floor for a modular ecosystem.

“When we’re looking at our technology and architecture, we’re looking at every sub-component and what capability that provides us,” Amazon Global Robotics VP Joseph Quinlivan told me on a panel at the event today. “And how can we commoditize that and — in much like the software space — build a clean API and form factor around that, that gets to be reused across many different robotics solutions and architectures. One of the reasons we’ve been able to go pretty fast and build a wide array of products beyond the initial Kiva product, is we were able to use this architecture and these technologies that were thought of more than just a problem that we were immediately solving.”

At Re:Mars a few weeks back, the company unveiled a number of new robotics systems designed to fit into that growing warehouse ecosystem. The headliner of the bunch was Proteus, a new system that introduces full autonomy while maintaining Kiva’s rough form factor. The company noted at the time:

Proteus autonomously moves through our facilities using advanced safety, perception, and navigation technology developed by Amazon. The robot was built to be automatically directed to perform its work and move around employees — meaning it has no need to be confined to restricted areas. It can operate in a manner that augments simple, safe interaction between technology and people — opening up a broader range of possible uses to help our employees — such as the lifting and movement of GoCarts, the non-automated, wheeled transports used to move packages through our facilities.

We suggested, at the time, that the system might be the product of Amazon’s 2019 acquisition of Boulder-based autonomous cart maker, Canvas. Quinlivan, however, says the robot was developed independently of the acquisition. 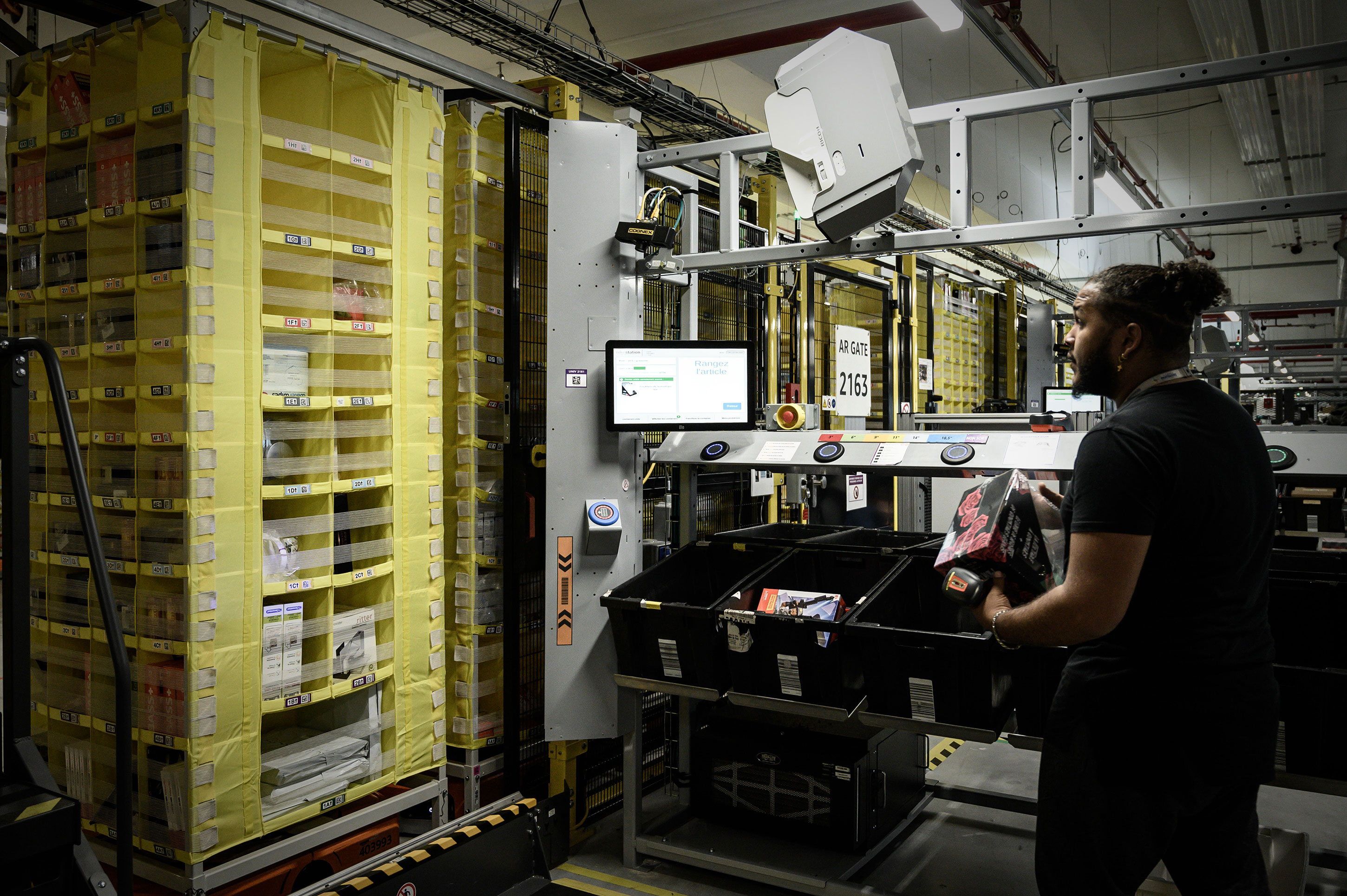 An employee scans an item at work stations part of mobile robotic fulfilment systems also known as ‘Amazon Robotics’ during the inauguration of a new Amazon warehouse in Bretigny-sur-Orge, some 30 kms south of Paris, on October 22, 2019. Image Credits: PHILIPPE LOPEZ/AFP via Getty Images

“That was internally developed by the Amazon Robotics team that came out of the Kiva acquisition,” the executive says. “A lot times at Amazon, we have concurrent development efforts. We’re excited about what the Canvas team is going to deliver, and they’re going to focus on a different application we haven’t announced yet.”

He also pushes back on the notion that Amazon’s recently announced $1 billion fund, which backed a number of robotics firms, including Agility, is a pipeline toward future acquisitions.

“I don’t think we invest — especially in early stage-companies — because we want to acquire it. We almost never have that discussion. We invest because we believe that the people have a passion for what they’re solving, it’s an interesting problem. We almost have the mentality that we want to invest in things we don’t believe could be achieved, because we could be wrong.”