A year ago, Club Feast, a subscription-based service aiming to disrupt the food delivery industry, emerged from stealth with $3.5 million in seed funding and the backing of prominent investors, including General Catalyst and Pika Capital. Co-founders Atallah Atallah, Ghazi Atallah and Chris Miao claimed that, by working with hundreds of restaurants to create low-priced meals, they could offer delivery that only cost $5.99 per dish plus a $2 delivery fee (and a $1 fee for single-meal orders).

The business appeared to be going strong, even hiring travel bloggers for promotional spots on TikTok. But earlier this year, subscribers started seeing higher tabs and fees. Then, within the last few months, Club Feast ditched its consumer offering completely in favor of corporate catering, leaving its original customers with meal credits that they say they can’t use.

“The advertised price didn’t last long, and by the time I stopped using the service, the prices were the same as Seamless and Uber Eats,” one former Club Feast user told TechCrunch via Twitter. “I would literally look in the [mobile] app and the price was different. Then they tried to say it was because of rising prices of ingredients, etc., [but] the issue for me was lack of transparency and accountability.”

At launch, Club Feast had diners sign up for a weekly meal plan and reserve lunch or dinner orders several hours ahead of time. Subscribers got a set number of meal credits, which could be topped up, paused or spent at any time. Club Feast’s restaurant partners offered four or five meals to choose from, which came to between $8.50 and $9 with the fees factored in — or less for customers enrolled in a $7.99-per-month “Feast Pass” plan that did away with delivery fees.

The idea was to give restaurants an estimate of purchase volume so they could plan ahead and cook economically — passing the savings on to diners. While operators accepted lower profit margins on Club Feast meals, they did so with the expectation that higher order volumes would make up for it. Club Feast’s bike-riding delivery drivers, too, had more predictability than with on-demand ordering platforms in the sense that routes were chosen for “efficiency” and meals were dropped off on a regular schedule.

In a January 2021 interview with TechCrunch, Atallah Atallah said that — while Club Feast might eventually introduce higher-priced fancier meals — the base price point would remain intact. “We want to make sure that does not affect the $5.99 concept,” he said.

There was reason to believe Club Feast would keep its promise. Atallah Atallah is also a co-founder of restaurant rewards company Seated, which claims to have brought in tens of millions of dollars in revenue for its restaurant partners. And Club Feast was on an expansion tear for a year, adding New York City and the larger Bay Area to its delivery zones after running pilots in San Francisco and San Mateo.

But the calculus changed at some point. By mid-2021, meal prices had increased to $6.99. Then Club Feast started tacking on an 18% service fee and tweaked its delivery model: Customers could opt for faster deliveries in exchange for variable fees ($0.49 to $3).

Businesses adjust pricing all the time — especially in a tricky market where subscriber growth is key. That’s not unusual. Just last month, DoorDash increased the minimum order size for free delivery. But where Club Feast went wrong was its failure to be proactive about informing of pricing changes, according to the customers who spoke with TechCrunch.

“As for the actual $5.99 promise, no one expected ~10% inflation, so restaurants were forced to increase the pricing. We did everything possible to keep it that low but we wanted to be fair to both sides the restaurants and the consumers so we found a midpoint,” Atallah told TechCrunch. 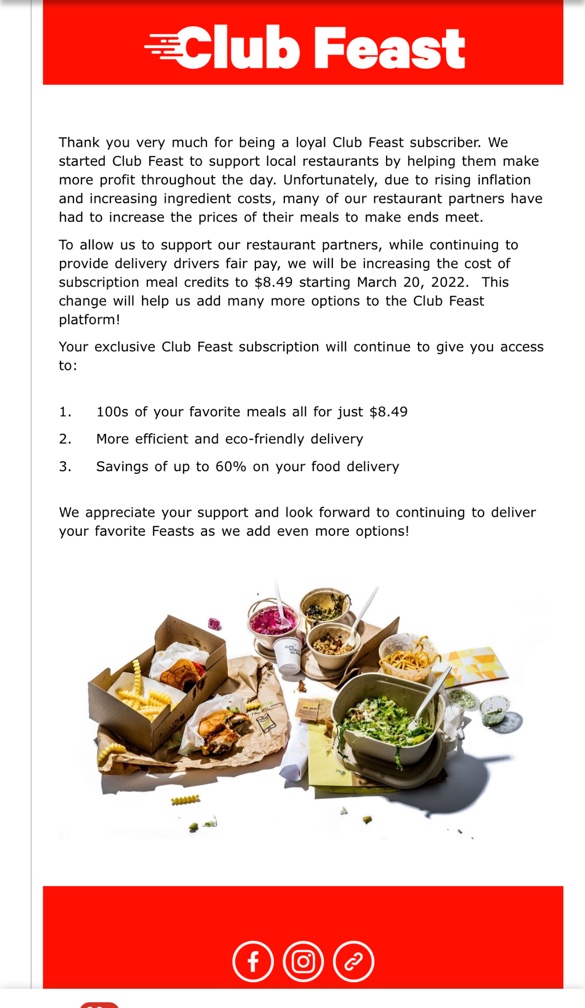 An email ostensibly sent to customers about one price increase.

It’s around this time that some delivery people for Club Feast complained on social media that they weren’t being paid in a timely manner for extra deliveries on top of their scheduled routes. One said that Club Feast promised to send a log sheet, but never did. Others lamented the lack of payment history, estimates of wages per shift and tip visibility in the app.

Club Feast — perhaps on the hunt for alternative lines of business — began promoting large-format group and family orders. A few months into 2022, customers found they couldn’t use their credits to place dinner or weekend orders. Soon, they couldn’t place any orders at all.

A shift in business model

Several customers tell TechCrunch that the app and website mysteriously stopped working in June. Those who’d purchased meal credits couldn’t use the credits. Some received full or partial refunds, but others continue to be charged for their weekly subscriptions and haven’t been able to close their accounts.

“I tried to reach out [to customer service], and was told my subscription has been cancelled and refund processed … I did not get my refund,” one customer told TechCrunch via email. “I reached out again and was told once again that my refund has been processed and I need to be patient … If the goal is to make it difficult to get money back so people will walk away, it has succeeded.”

This reporter tried repeatedly — and failed — to sign up for a new Club Feast account. The company’s FAQ reflects the old business model, but Club Feast’s homepage has been rebranded with advertisements for new (as of July) corporate catering services: $60 per month per employee for one meal delivered every week up to $300 per month per employee for five meals a week.

In a recent interview with Food on Demand News, Ghazi Atallah said that the plan was to scale Club Feast to new markets throughout 2022 and into 2023. It’s unclear whether that’s still in the cards, pivot or no.

Atallah claims that Club Feast has made an effort to refund any customer who made a request and said that anyone who didn’t feel they got their money back can email him personally.

“[Refunds] took a few days for Stripe processing … the delay [also] might have been from their bank processing, which created some confusion,” he said. “As for the pivot, it’s more of us focusing more on our corporate clients as we have seen massive demand for food as a benefit for the must have perk for return to office. Our price point makes it accessible for any company to offer great delicious meals for their team members while supporting local restaurants. We grew the business-to-business business by over 600% in the last six months.”

Club Feast’s messy change in direction comes at a turbulent period for the broader food delivery industry. This week, Just Eat Takeaway was forced to write down the value of GrubHub by billions just a year after buying the group. A promising hospitality-focused food delivery concept, Butler, abruptly shut down earlier this year. And in early July, ChowNow laid off around 100 employees in what the CEO called a response of worsening capital conditions.