In this challenging fundraising environment, more startups than ever are turning to alternative financial solutions such as debt.

Despite the negative connotation associated with debt, a startup should not view it as an act of desperation during downturns, as TechCrunch’s Kyle Wiggers and Alex Wilhelm have recently noted.

Companies that have high recurring revenue and visibility into future performance — such as SaaS startups — in particular can benefit from debt financings, Alex points out.

Enter Founderpath. The Austin-based firm recently secured $145 million in its own debt and equity financing to help B2B SaaS founders grow their businesses without diluting ownership. Founder Nathan Latka experienced firsthand the painful process of giving up too much of a stake in a startup he’d founded years ago — an experience, he says, ultimately led him to start Founderpath.

With the market shifting dramatically in recent months, Latka says Founderpath has seen more demand than ever these past few months.

So, how does it work? Founderpath claims that it allows founders to take up to 50% of their annual recurring revenue (ARR) in upfront cash. It asks the companies to connect whatever subscription system they use to its own platform. Once Founderpath has visibility into a startup’s finances, the company can receive an offer “in under 2 to 3 minutes,” Latka says.

Founderpath is focused on bootstrapped SaaS companies doing at least $10,000 in monthly recurring revenue (MRR), with the typical company profile doing between $1 million  and $5 million in ARR.

Now, Founderpath is not the first (or last) firm that is out to help SaaS companies with non-dilutive financing. It competes directly with Pipe — a marketplace that connects companies with predictable, recurring revenue to investors that was valued at $2 billion last year — and Capchase, which in July of 2021 secured $280 million in new debt and equity funding.

How Founderpath differs from others in the increasingly crowded space lies in its terms, Latka believes. For example, he says that Founderpath offers founders as much as 12 to 48 months to pay back their debt, no prepayment penalties and no warrants. Typical terms are $500,000 paid back on a 24-month term at a 7-12% discount rate, according to Latka. Competitors typically offer less time for payback, and higher rates, he said.

“There are no other fees and money is wired overnight,” Latka told TechCrunch.

As mentioned above, the CEO is eager to help founders not make the same mistakes he did as a young entrepreneur. After starting his own SaaS company when he was a 19-year-old student at Virginia Tech, Latka thought he was “on top of the world.”

“I bootstrapped it to like a million bucks in ARR,” he recalls.

Then, Latka got a cold email from some VCs and ended up raising $2 million at a $10.5 million post-money valuation in 2014.

That same year, Latka launched a podcast and has since interviewed one SaaS founder nearly daily — recording 2,500 episodes to date that have had 18 million downloads, he said.

So often, when he stopped recording, a number of founders would talk to Latka about the possibility of taking on debt. It opened up a new world for Latka, who said he “quickly realized that debt was the secret to keeping control of your SaaS business, getting capital quickly and avoiding the VC dilution.” 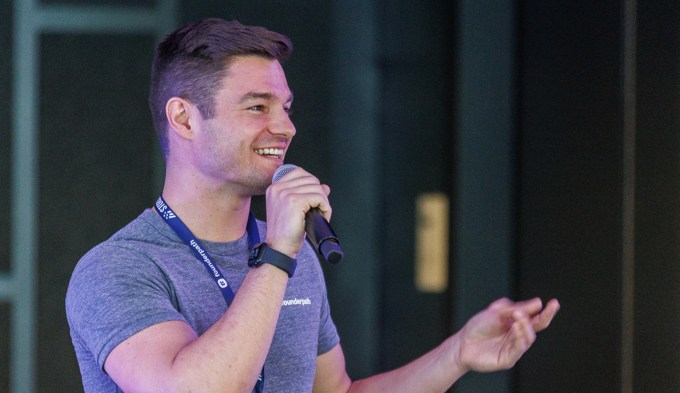 As he began helping founders negotiate debt, Latka concluded that many of the terms presented in debt financings were not founder-friendly and included things like massive prepayment penalties, 1 to 2% warrants, equity kickers and “repayment caps that made it really hard to figure out what the true interest rate was.”

Other things these contracts included? Legal fees and covenants that founders could take money but they’d have to keep a certain amount liquid in their bank — “dead money” that couldn’t be used to grow the business, in Latka’s view.

So in 2018, he started using his own money to write debt checks into SaaS companies. He found that it was “really hard to track all those debt investments” without software so he built a tool that he says gives founders a way to connect their subscription billing account to his platform.

“If you’re running a SaaS company, and you’ve got 100 customers paying 50 bucks a month,” Latka needed a way to view that, he told TechCrunch. “In order for me to get comfortable doing a debt deal, I needed to understand who your customers were and what your revenue was so I knew what I was lending against. That allowed me to track these deals more accurately and make faster and more accurate offers to founders for new debt.”

By 2020, he had officially founded Founderpath to formalize his lending. Today, the firm has just eight employees — a fact Latka prides himself on, saying it has operated in a capital-efficient way. So efficient that it reached profitability last year, he said. And that podcast? It serves as a fantastic distribution channel.

With today’s shifting environment, Founderpath has branched out to not only helping bootstrapped founders, but also who Latka describes as “capital-efficient SaaS founders who have raised less than their ARR and were looking for bridge rounds.”

“We are about CAC (customer acquisition costs), customer churn, average revenue per customer, lifetime value of customer,” Latka said. “We’re focused on B2B SaaS founders only because we need proof they can pay us back, since we take no equity.” 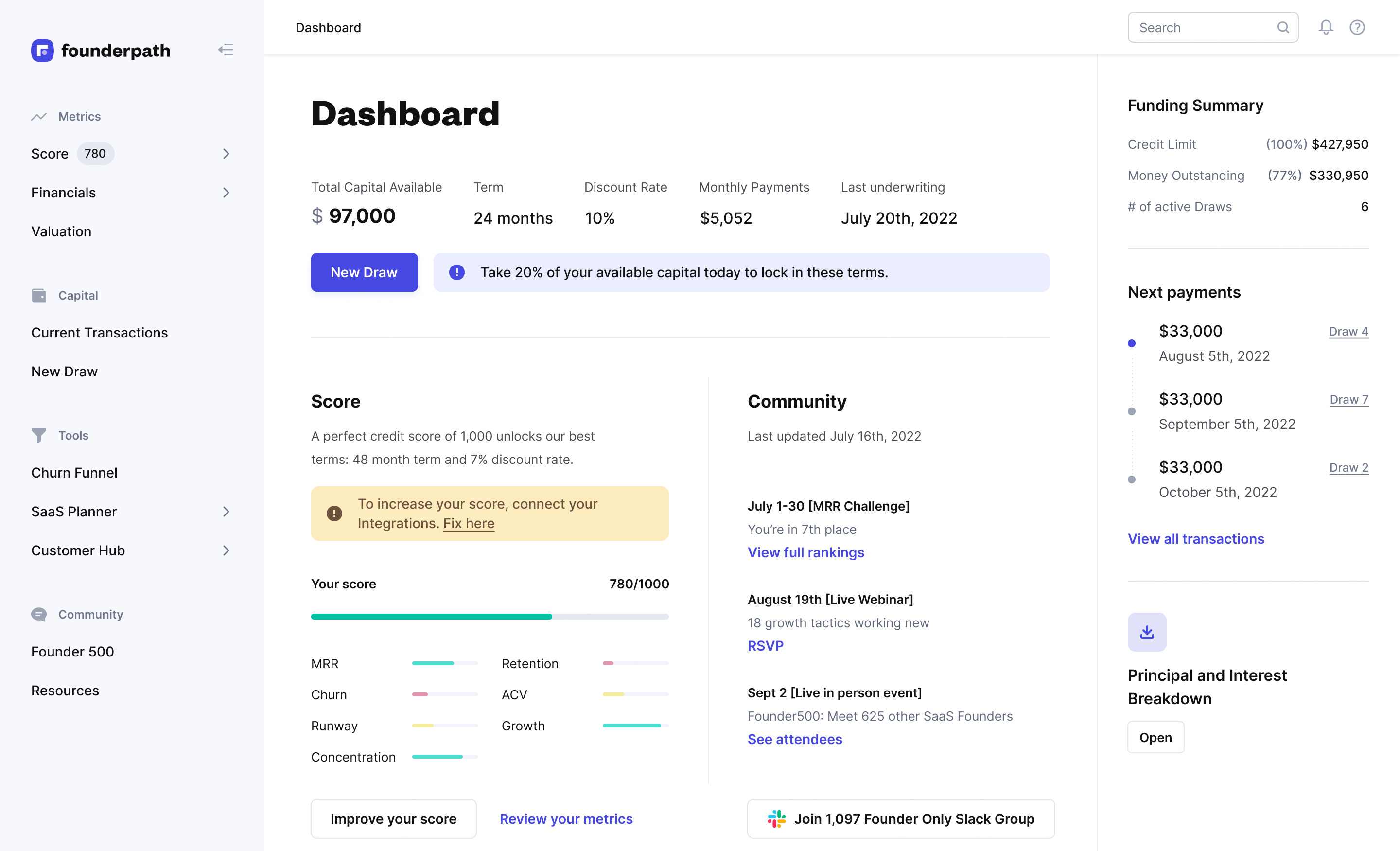 In raising its own funding, Founderpath turned to Forbright Bank, with $8 billion in assets under management, to lead the $135 million debt deal, and Singh Capital Partners (SCP) to lead the $10 million equity financing. Other backers include the founders of companies such as ZoomInfo, Brandwatch, Truebill and Par Tech, among others. In total, the firm has raised $15 million in equity.

SCP, he said, is a multifamily office with over 800 LPs who are public company SaaS executives, current or exited founders and family offices.

Nicholas Ricciardella, an associate at SCP, said a number of the firm has a number of LPs who manage public market portfolios and were watching public SaaS multiples compress in real time months before they started to show up in the private markets and VC.

“Using that feedback, we course-corrected much earlier compared to our peers and often became the vanguard of bad news when giving terms to founders that would now be considered ‘market,’ ” he wrote via email. “With all the pushback we were receiving from founders coupled with the slow grind lower in valuations as more and more VCs began to reconcile their underwriting to public market valuations, we realized that non-dilutive financing options were set to take off since they allow SaaS founders an escape from having to fund their businesses at lower valuations (i.e. more dilution) than previously expected.”

He described Founderpath’s underwriting as “superior,” and said that SCP was also impressed with the company’s capital efficiency and customer acquisition strategy.

San Antonio, Texas-based Active Capital, which led Founderpath’s $5 million seed round in October of 2021, was a fitting backer. Founder and CEO Pat Matthews told TechCrunch he has known Latka for over a decade and even invested in his first startup.

“That company didn’t fare so well… but even in a time of distress and hardship, I only grew more impressed with Nathan’s character and unique talents,” he said.

Plus, Matthews himself spent the first half of his career as a bootstrapped SaaS founder. (He founded Webmail before exiting to Rackspace).

“Although I now run a venture capital firm, I believe the future of small business will consist of tens of thousands of hardworking, bootstrapped SaaS founders that will never want or need to raise VC,” he told TechCrunch. “Founderpath is creating an entirely new financing path for these types of companies and the company’s focus on bootstrapped SaaS founders is enabling them to tailor the right kind of financial tools and capital products for these types of businesses. I think Founderpath is a great example of verticalized fintech for a fast growing sector of the world.”

Why debt raises might make sense in a down economy