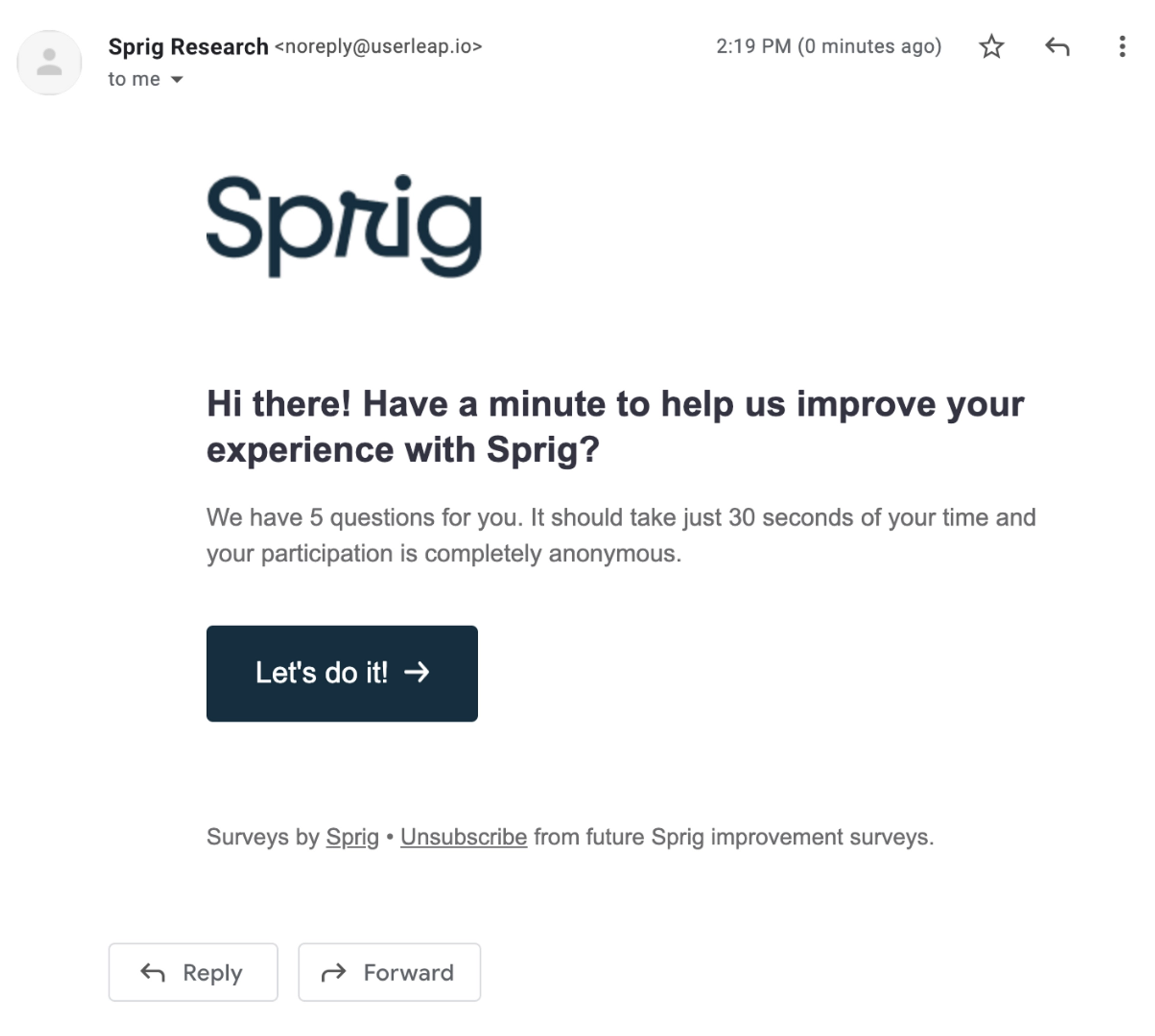 Sprig, a startup offering tools for user and software product research, today announced that it raised $30 million in a funding round from Andreessen Horowitz, Accel, First Round Capital, Elad Gil and Figma Ventures. It brings the company’s total raised to $90 million, which CEO Ryan Glasgow says is being put toward expanding Sprig’s service line, support sales and marketing efforts, and dedicating resources to integrations and partnerships.

Glasgow founded Sprig in 2019. Prior to starting the company, he was an early team member and product manager at website builder Weebly and search app Vurb. While at Weebly, Sprig says he realized how difficult it was to research across the product development life cycle, especially when timelines are tight and research resources are in high demand.

“While I had access to a variety of tools ranging from product analytics and A/B testing to feature flagging and roadmaps, I lacked a tool that would make it fast and effortless to understand [Weebly’s] customers in real-time,” he told TechCrunch. “I knew there was a better way, and in January 2019, I started Sprig, then called UserLeap.”

To Glasgow’s point, public metrics suggest that user experience research is rarely prioritized. A 2019 survey from UserZoom found that companies struggle to integrate user research into product development and that budgets remain stagnant, even as the majority of CEOs see user and customer experience as a competitive differentiator. According to one report, only 55% of companies currently conduct any user experience testing — despite the fact that every dollar invested in user experience is estimated to net a $100 return, a Forrester Research study found. 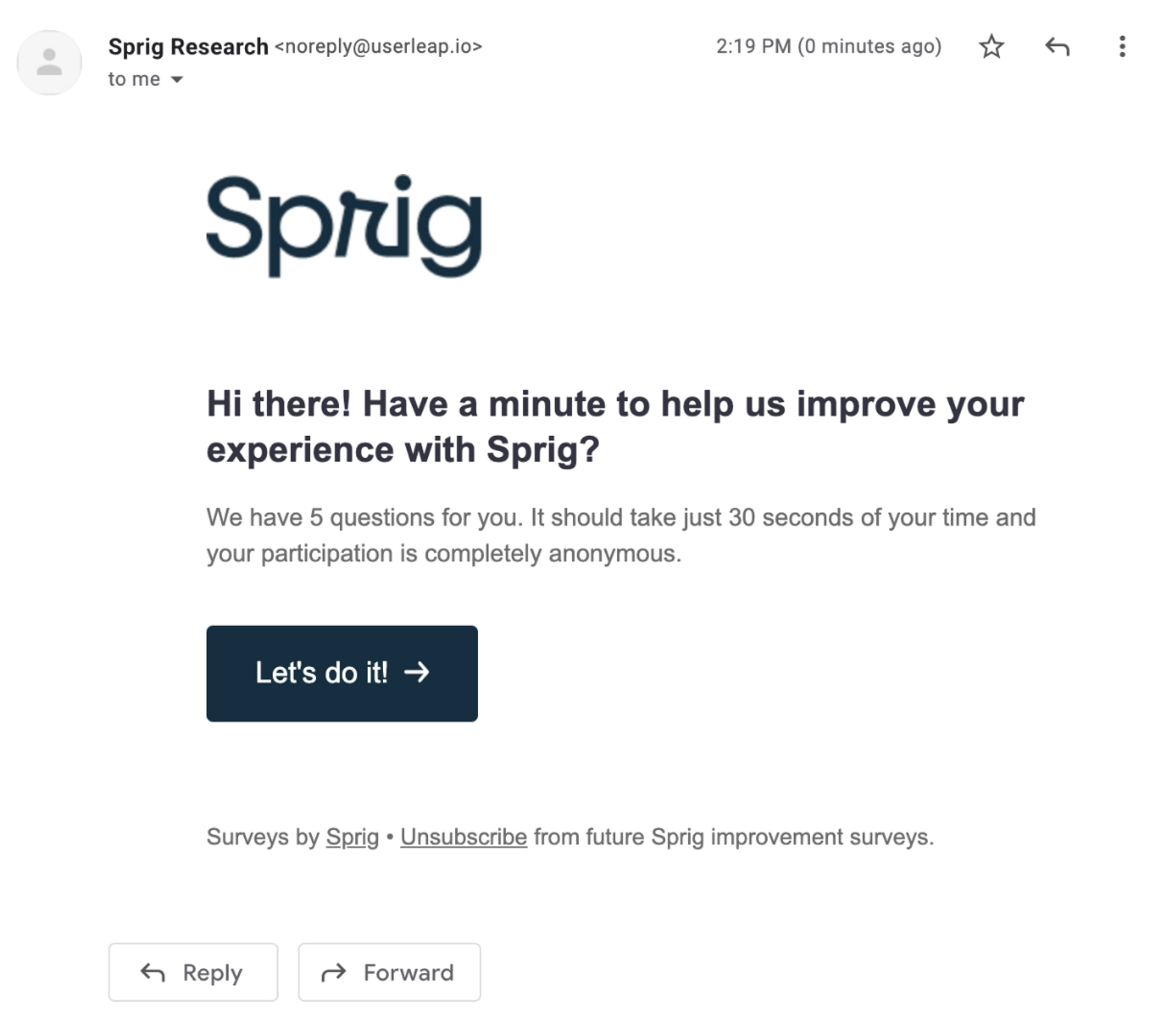 Sprig provides surveys and templates for research teams conducting user experience studies. But it also goes beyond this, analyzing open-ended question responses in the surveys to summarize the results into themes. Leveraging AI, Sprig recognizes “thematic similarities” between the answers, Glasgow said — even in the absence of overlapping words and phrases.

“Sprig’s surveys are built on an events-based architecture to trigger based on specific actions or inactions (e.g., dropped out of onboarding, didn’t use a specific feature) and user characteristics (e.g,. plan type or geography) after a low or no code one-time integration,” Glasgow explained. “Companies operating at … scale often consider building an in-house survey tool, which requires a dedicated team of engineers to operate and maintain it. With the cost of a fully loaded engineer costing upwards of $200,000 annually, investing in Sprig is a no-brainer.”

Indeed, research is often costly — software-as-a-service companies spend an estimated 23% of their revenue on R&D, for example — and there’s no guarantee it’ll lead to a successful outcome. Forty-two percent of companies in a recent CB Insights poll cited “no market need” as the reason that one of their products failed to gain traction.

The competition taken into account, Glasgow is pleased with Sprig’s performance of late, noting that net recurring revenue grew 300% over the last 12 months. (He demurred when asked about annual recurring revenue.) Sprig counts Dropbox, Loom and Square among its current customers, and the company plans to grow its headcount from 95 today to 125 by the end of the year.

“Sprig did not need the funding, but we were proactively approached by our existing investors at an increase from our previous valuation. It was too good to pass up, so we did a quick inside round that only took a few days,” Glasgow added. “Companies need to have conviction before deploying resources to build new products and be able to evolve the product based on user feedback. Sprig helps scale research programs by quickly uncovering insights freeing up the team to focus on the highest leverage work.”