Much of the technology attention lately has been paid to e-commerce companies, driven in large part by brick-and-mortar stores having to close for some time during the global pandemic. However, some companies, like retail technology company Swiftly, want to give those retailers a chance to capture similar customer experiences, loyalty and digital advertising dollars.

When we spoke to co-founder and CEO Henry Kim last April, he was focused on helping grocery chains go digital, a slice of the market that accounted for 9.5% of total U.S. grocery sales in 2021, but is expected to grow to 20.5% in 2026. The company had raised $15 million to date and had just announced a deal with Dollar Tree.

“We knew that over the past 20 years a disproportionate share of the venture capital dollars went to e-commerce businesses, while comparatively few venture dollars were invested in tools to help brick-and-mortar retailers,” Kim told TechCrunch. “If you look at the split of how Americans buy, even today, over 80% of purchases still happen in a brick-and-mortar store.”

Swiftly provides the technology tools that Kim says “democratizes the technology lead, enjoyed by Amazon and Walmart, to the rest of the industry,” like mobile technology capabilities to engage shoppers digitally and make shopping in-store as easy as online, while also providing analytics and advertising, so that they can compete against e-commerce retailers using their operational strength without being disadvantaged by an aging or non-existing technology platform.

Since its seed round in 2018, the company has more than doubled in size with a focus on hiring in engineering, product, sales and marketing. It also rounded out the leadership team to include a CRO, CFO and vice presidents of retailer growth, engineering and business development.

Swiftly is being used by hundreds of consumer brands in nearly 10,000 store locations, which accounts for more than $30 billion in gross merchandise volume.

Today, the company is back with an even bigger round of funding, a $100 million Series B led by Wormhole Capital, to give it $120 million in total funding. The round also included Liquid2 Ventures, Bramalea, Gaingels, Silicon Ventures, Proof VC, Western Technology Investment, Sand Hill Angels and The Martin Family. Kim did not reveal Swiftly’s valuation.

This raise was always part of the plan, and Kim says it “sets Swiftly up for the next level of scale as we deploy across the next million retail stores across the world.”

In addition to making investments in engineering, sales and marketing, and technology infrastructure, the new capital will be used to expand into new verticals outside of grocery retail, for example, beauty, home improvement and sporting goods. 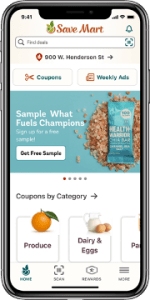 Meanwhile, Kim says the future of e-commerce will be “who owns the customer.” And from Swiftly’s research, consumers and brands would still invest their money in a brick-and-mortar store that has anchored their community for years.

That’s because traditional retailers can employ digital tools for recapturing customers faster than Amazon can build 3,000 grocery stores, something the company already tried to do with bookstores, but decided last week to close them, citing a challenging in-person shopping environment due to the pandemic.

However, other startups are taking Swiftly’s position and making similar bets that in-store will continue to dominate as investors come along for the ride. For example, Foxtrot is developing digital experiences for convenience stores.

“In the next two years, you’re going to see brick-and-mortar retailers leverage their advantages like the convenience of their store locations, the fact that most grocery products are cheaper when purchased in the store rather than online and the personalization opportunities afforded by mobile technology to develop their own competitive advantage,” Kim added.