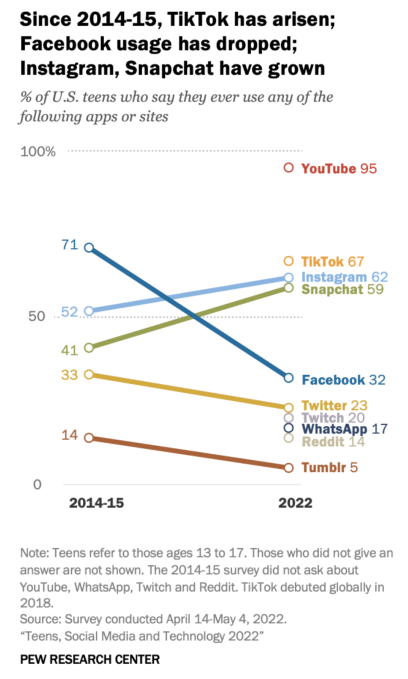 Gen Z internet use is on the rise, but the rate at which teens use Facebook is rapidly declining. A Pew Research Center study on teens, technology and social media found that only 32% of teens aged 13-17 use Facebook at all, but in a previous survey from 2014-2015, that figure was 71%, beating out platforms like Instagram and Snapchat.

“There are now well over five strongly positioned social media platforms to endlessly scroll through, and it isn’t sustainable for our minds to compartmentalize nor prioritize our relationship with all of them,” Terpak said via email. “For the sake of time and sanity, people have to eliminate platforms that begin to lack a value-add incentive.”

Terpak thinks that Facebook, which teens often associate with their parents, has little to offer Gen Z.

“The culture cultivated by the average Facebook user is very disconnected from what attracts Gen Z to a platform today, instead exuding the energy of a spam email,” she said.

Even in 2013, when 77% of online teens used Facebook, young users still felt negatively about the platform.

“While Facebook is still deeply integrated in teens’ everyday lives, it is sometimes seen as a utility and an obligation rather than an exciting new platform that teens can claim as their own,” Pew’s report from 2013 said. In that nine-year-old study, Pew found that teens expressed more enthusiasm for other platforms, even if they weren’t using them as much as Facebook. That trend has remained constant — as new generations of teens join social media, they’ve almost abandoned Facebook altogether.

Pew’s new findings are also consistent with Facebook’s own internal reporting, according to documents leaked by whistleblower Frances Haugen. A Facebook researcher found in early 2021 that teenage users on Facebook’s app had declined 13% since 2019 and projected that the figure would continue to plummet 45% over the next two years. Overall, Facebook usership has remained somewhat stagnant, but this drop-off in a key demographic is bad news for Facebook’s ads business, which makes up the bulk of its revenue.

Even if teens are tired of Facebook, they haven’t given up on Instagram, another Meta platform. Sixty-two percent of teens use Instagram, up from 52% in the 2014-2015 survey. But TikTok, which wasn’t even released at the time of the last study, is now used by 67% of U.S. teens. Ninety-five percent of teens say they use YouTube, which may make it seem like it’s the dominant social platform — but many users interact with the platform simply to watch videos, rather than as a place to connect with others online. For example, a teen who uses YouTube to listen to music would be included in that 95%. 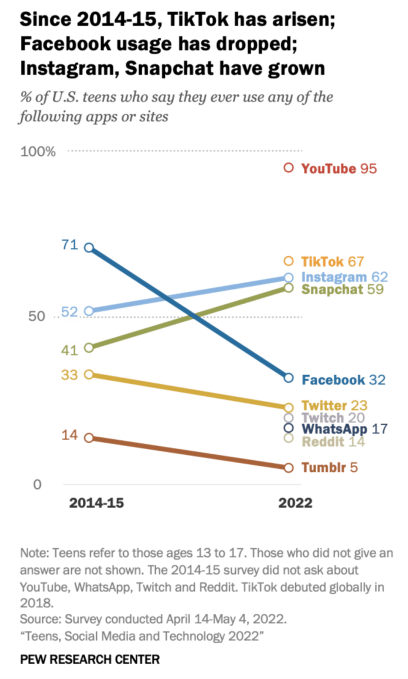 But as TikTok inches above Instagram and Snapchat — which are used by 62% and 59% of American teens, respectively — it makes sense why these older platforms are so desperate to mimic their newer competitor.

Pew also asked the 1,316 surveyed teens about the frequency with which they use these apps. But TikTok still earned a greater share of teens’ attention than any platform aside from YouTube, which 19% of teens say they use “almost constantly.” TikTok, Instagram and Snapchat earned this “almost constant attention” from 16%, 10% and 15% of teens respectively. Only 2% said this about Facebook.

These “almost constant” admissions might seem alarming, but teens are aware that social media usage may not always provide the social connection they hope for. Thirty-six percent of teens think that they spend too much time on social media. Conversely, only 8% of teens said that they think they don’t use social media enough.

If you think Gen Z is full of phone-addicted zombies, though, you might be wrong. Forty-five percent of teens said that they wouldn’t have trouble giving up social media. More power to them.

Instagram gets worse with dark patterns lifted from TikTok