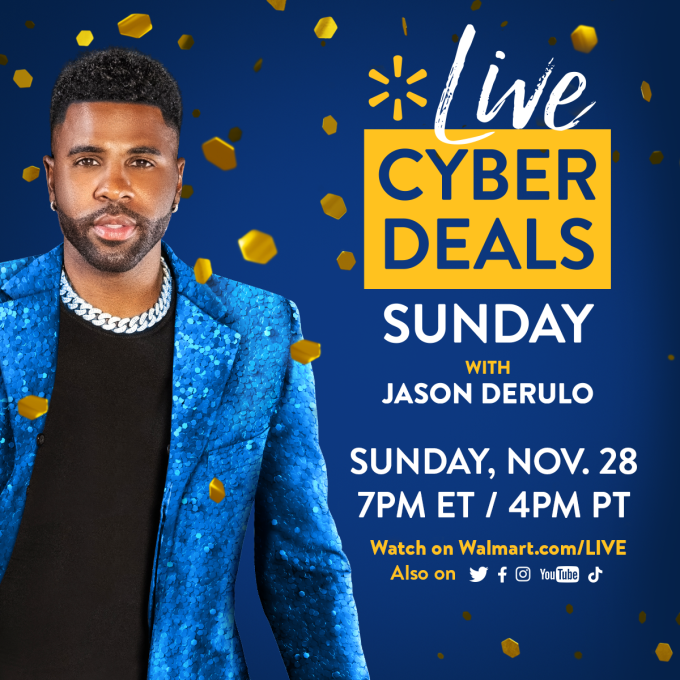 Twitter’s e-commerce initiatives now include livestream shopping and Walmart will be the first retailer to test the new platform. Over the past year, Walmart has invested in live shopping by hosting events across social platforms like TikTok and YouTube, and soon it will debut Twitter’s first-ever shoppable livestream. On November 28, Walmart will kick off a Cyber Deals live event on Twitter, where users will be able to watch a live broadcast, shop the featured products, and join the conversation around the event by posting tweets.

The livestream will begin at 7 PM ET on Nov. 28, 2021, and will allow Walmart customers to shop from Twitter as well as a number of other platforms, including Walmart.com/live, and the retailer’s Facebook, Instagram, TikTok, and YouTube accounts. Musician-turned-creator Jason Derulo will host the livestream where he’ll introduce the audience to deals in electronics, home goods, apparel, seasonal décor, and more during a 30-minute variety show. Surprise special guests will also drop in, says Walmart. 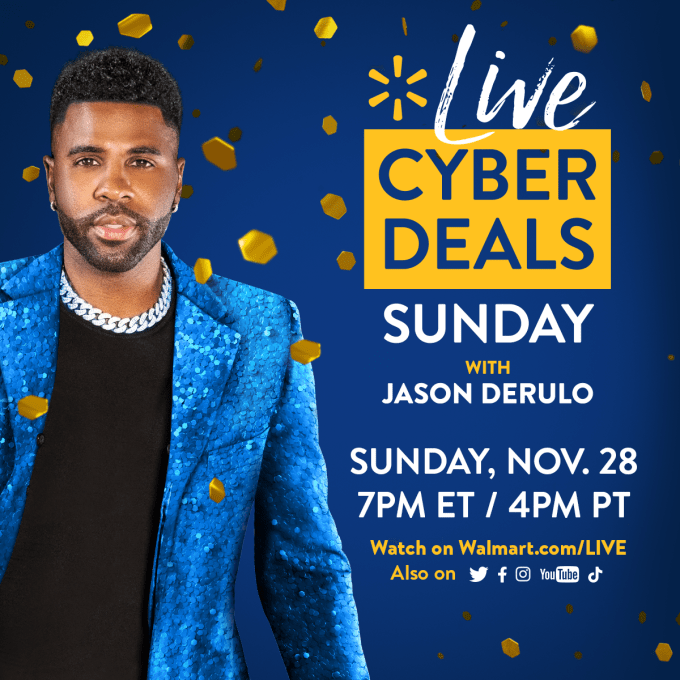 Walmart has been broadening its support for livestream shopping throughout 2021. It hosted its first shoppable livestream last December when it worked with TikTok on its Holiday Shop-Along Spectacular event, shortly after its planned investment in the video app fell through. (Walmart was interested in a deal for TikTok following Trump’s executive order that would have forced a sale of TikTok’s U.S. operations. But Trump’s order was blocked by the courts.)

That first TikTok live event proved successful, Walmart said at the time, having delivered 7x more views than had been anticipated. It also helped Walmart grow its TikTok follower base by 25%. Though the retailer didn’t detail the sales revenue the event delivered, it ran a second TikTok livestream shopping event just a few months later.

While Walmart’s bid for TikTok had signaled the retailer’s interest in live, social e-commerce, it saw potential outside of TikTok, as well. Over the past year, Walmart expanded livestream shopping tests to include other platforms. To date, Walmart has hosted more than 15 livestream events across five platforms, including its own website.

Those live commerce initiatives will now include Twitter, which is today revealing its new livestream shopping platform to the public.

Twitter says the Walmart Cyber Deals livestream will serve as the initial test of Live Shopping on Twitter in the U.S. 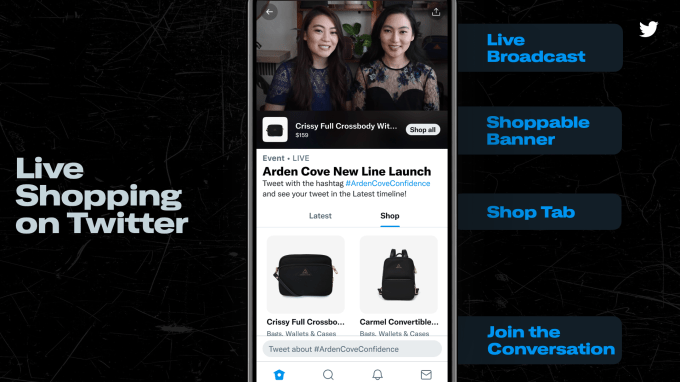 It will include a live broadcast that streams at the top of a Live Event page, followed by a Shoppable Banner and Shop Tab where the products shown in the livestream are featured. Twitter users will be able to toggle back and forth between the “Lastest” tab and the “Shop” tab during the event as they preview the products. When consumers want to make a purchase, they’re directed to the retailer’s website within an in-app browser where the livestream will continue to be broadcast. That way, users won’t miss anything during checkout, Twitter says.

At the bottom of the Live Event page, there’s also a text box where consumers can tweet about the livestream with a suggested hashtag.

“We are honored to have Walmart onboard as the first-ever brand to host a Live Shopping event on Twitter. Walmart is renowned for bringing customers an immersive look into their products and we are excited to bring this experience onto Twitter with them, while helping them reach their business objectives,” said Sarah Personette, Chief Customer Officer at Twitter, in a statement.  “This is just the first of many Live Shopping events we hope brands will be able to bring to market, and we can’t wait for people to watch, chat, and shop — all through Twitter,” she added. 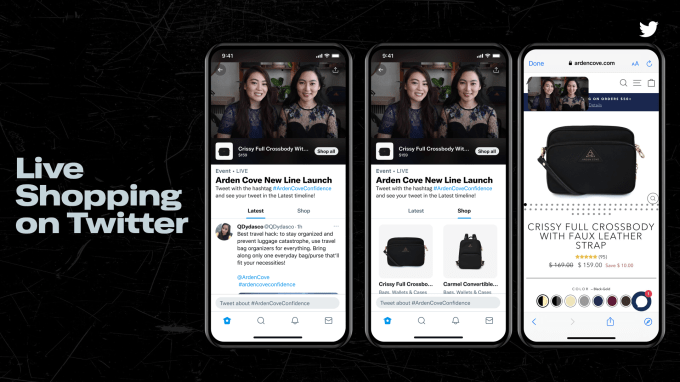 The livestream shopping platform builds on Twitter’s earlier tests of a Shop Module, launched in July, that gave brands, businesses, and retailers a way to showcase their products directly on their Twitter profiles. The test was meant to better understand if there was demand for shopping on Twitter, and had included a handful of pilot partners like gaming retailer GameStop and travel brand Arden Cove, among others.

Walmart said it was interested in testing Twitter’s new capabilities because it consistently sees high returns across top- and middle-of-funnel content on Twitter’s platform, which makes it a natural next step for Walmart’s explorations into social commerce.

The new Twitter livestream event represents the start of a bigger push into live shopping over the 2021 holiday season for Walmart. The company says it has over 30 shoppable livestream events planned across eight social and media platforms, including BuyWith, BuzzFeed, Facebook, IGN, TalkShopLive, Tasty, Twitter, and YouTube. (TikTok was not listed, but Walmart told us it’s working closely with the TikTok team on future shoppable livestreams.)

“Twitter continues to be an important platform for Walmart’s business and our customers,” said William White, Chief Marketing Officer at Walmart U.S. “We’ve been focused on charting new territory in shoppable livestreams and are excited to celebrate an important milestone together with the first Livestream Shopping event on Twitter. We’re meeting customers where they are and making it easier to shop incredible deals and find inspiration through dynamic, interactive experiences. We look forward to continuing to bring engaging experiences to our customers that allow them to shop seamlessly while also being entertained,” he added.

Following the initial test of Live Shopping with Walmart, Twitter says it will start testing a new way to house merchant onboarding and product catalog management tools through an interface called the “Twitter Shopping Manager.” This will simplify the process of getting started with Shopping on Twitter, the company says. It also plans to make the Shop Module available to more retailers over the coming weeks.

Twitter told TechCrunch it doesn’t take a cut of the e-commerce revenues delivered through Live Shopping nor are brands paying to be included. But offering live shopping on Twitter could entice more users to join the platform, which has historically struggled with growing consumer adoption.

The live event will be available on Twitter on iOS and desktop in the U.S., starting on Nov. 28th at 7 PM ET/4 PM PT.